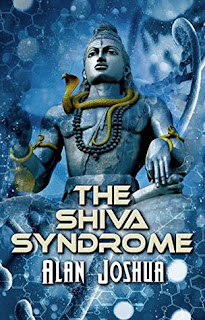 Power from the past; danger in the future.

Science opens the door for humans to reach God-like powers of creation and destruction.

A secret Russian mind research laboratory erupts, annihilating thousands and leaving a monstrous, one-mile deep crater in its wake. Beau Walker, a psychologist and reluctant empath, is coerced into joining a research project, code-named SHIVA, to investigate the catastrophe. An ordinary scientific investigation leads Walker and the research team into alternate realities.

Walker struggles against political and military deceptions, deadly superhuman adversaries, and personal demons to unlock the riddle of the SHIVA syndrome, risking his life and the very existence of humankind.

The SHIVA Syndrome offers a dizzying ride into extraordinary human abilities. Prepare to alter what you believed was reality.

Buy The SHIVA Syndrome by Alan Joshua today at Amazon

Walker sat next to Kampmann. "You don't know what you did, do you?"
Her face paled. "It was like a waking dream. Like... like something guided my hands." She looked at him, wild-eyed. "My god, Beau, I wasn't in control.
Something controlled me!"


So I really like the mix of characters in this one. You get to know a few different characters even though most of the book is from Beau Walker's point of view. The story was vastly different from any Sci-fi I've read previously, and the pace was fast enough to keep me interested but not too fast as to lose me in what was going on. I definitely had to think more during this one while opening myself to believe anything was possible.

While the pacing was terrific, it did feel a bit long to me. Though I don't know what you would leave out to fix this small tidbit.


Walker and Leigh Kampmann have an on-again-off-again relationship. The off due mostly to past experiences more so then their actual relationship.

"Most people live out ordinary lives by denying death. Others live more completely because they're aware of it. I choose the second group."

Unaware, he whispered, "In the beginning there was only chaos. Then out of the void appeared Night and Erebus, the unknowable place where death dwells.
All else was empty, silent, endless, darkness."


"I'm sure you believe you saw something," he replied, helping her to her feet. "You've been under tremendous stress.
"Don't patronize me!" she snapped. "I saw... Well, I don't know what it was, but it wasn't stress."

Buy The SHIVA Syndrome by Alan Joshua today at Amazon