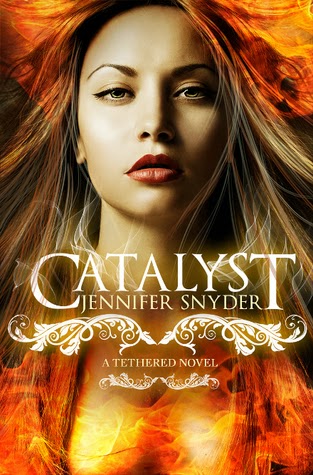 After learning she’s inherited a house in the beachside town of Soul Harbor, Georgia, Addison Harmon and her best friend decided to take a much needed vacation before the pressures of life after high school suffocate them too heavily.


But what Addison finds isn’t a chance to recoup from a bad break up and hang out with her best friend while she decides what she wants to do with her future. What she finds is Kace Sullivan—a sexy guy she can’t seem to get enough of—someone who with one touch reveals a seductive world full of magick and secrets Addison isn’t sure she’s ready to be a part of.

My Air, Your Fire...It's Elemental Baby

Just look at that cover, would you? Isn't it gorgeous?

I loved the beginning of the story with the mysterious inherited house that Addison receives upon the death of her birth mother that she's never known. It was a lot of fun reading Addison and her best friend Vera navigate Georgia on their own without parents around for the first time.

There's a lot of strange things that happen when they first arrive and she runs across some people that made me scratch my head and ponder their odd behavior. Even when some answers arrived for me as the story progressed, there were still questions popping up everywhere. There are a lot of characters introduced that I am very interested to know more of.

Kace is a stud that has Addison feeling sparks and forgetting all about her recent tragic break-up. There is a lot of potential there. Also, with the magick that's explored there is a TON of room for a fantastic series.

I know that I LOVE twists and turns, but this particular book didn't wrap up a single thread all the way.

The characters, while very enjoyable, aren't fully fleshed out yet. Also, one of my favorite characters isn't even in the story for long.

The main action came at the very end of the book and ended on a cliff-hanger. The rest of the book, I spent trying to figure out if people should be trusted or not. I think I was expecting a lot more magick throughout, but it is mainly just introduced and explained.

Kace is supposed to be a hot 'fisherman' for Addison, but for me, they are still in the getting-to-know-each-other phase so there's really no meat in their relationship. Addison I know more of, but what I know is that she is coming out of a relationship and is on the rebound. The two of them together are very cute, and I do like Addison's internal dialogue when Kace is around. There is some action, but it's cut away scenes so don't be looking for a steamy romp.

This one is a great set up for a series. I feel like the best is yet to come for this story-line. The magick that is introduced which is Elemental and Hoodoo has some real potential and I enjoy the mysteries even while I would like some of the threads tied up a little more. I like the characters and the side characters as well, but I do hope that we learn a lot more about them in the following books. I will be continuing the series. Recommended for some.

Vera nodded. "Yeah, tell me about it. I was putting the vibe out there and everything. Not many can turn me down when I let it release full-throttle like that."

"Actually, I have no clue why my mom ran off to have me. Are there any theories in town about why she gave me up for adoption too?"

"Magick wasn't real. It was something magicians claimed to use to create illusions and tricks of the eye, but not something I would have inside of me. No, what I felt was lust. Passion."
Posted by JezzebellJC at 10:17 PM