"I will not tolerate my fingerprints on file. And before you roll your eyes and sigh, I want you to work with Jenks specifically to evaluate a pixy's effectiveness in security. Morgan does extremely well despite her scattered working style, and I think the pixy is the difference." - Trent

"She didn't even consider leaving you there, Sa'han, but instead lost a portion of her freedom in buying your own. Such a mind will not be swayed by lures of money, power, or status. She's ruled by her emotions, which is not a bad thing if you can successfully show her your goals are the same as hers. I still believe that Morgan is a good risk." - Quen 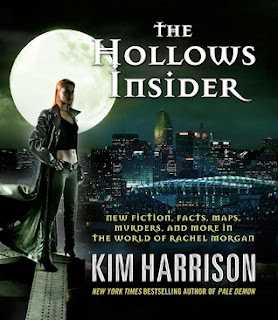 In the Hollows, the supernatural Inderlanders rule, and humanity must abide by their conventions, or else.

To survive among vampires, witches, Weres, gargoyles, trolls, fairies, and banshees - to say nothing of demons - humanity needs a guide. And now, written by Kim Harrison herself, here is an insider's look at the supernatural world of the Hollows, from an overarching new story to character profiles, maps, spell guides, charm recipes, secret correspondence from the elusive Trent Kalamack, and much more.

Enter the world of the Hollows like never before!

One misfired spell is all it took to sent investigative reporter Devin Crossman on a mission to uncover all the secrets of bounty-hunting witch Rachel Morgan and expose them to the world.

Herewith are all of Devin's notebook entries, a treasure trove of evidence including maps, speces profiles, magic spells, documents from Inderland Security, Takata's song lyrics, Betty Bob's recipes, ley line charms, entries from the Were Registry, articles from the Hollows Gazette, Rynn Cormel's Vampire Dating Guide, demonic spells, and many more entries that cast light into regions of the Hollows that have never been revealed.

But Crossman's one-man war against Rachel Morgan has not gone unnoticed...