Welcome to my stop on the Muskie Attack Book Tour hosted by Worldwind Book Tours. 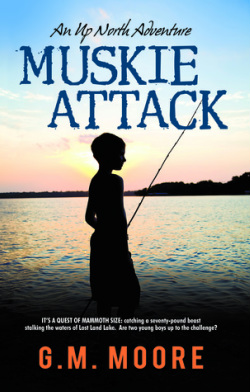 Goodreads Summary
For Corbett Griffith III, divorce and two busy parents mean goodbye city life, hello great outdoors. With their busy Chicago careers and schedules, his parents just don t seem to have any time for him. When his mother sends him to his uncle s Wisconsin fishing resort for the summer, Corbett feels that there s no one pulling for him or caring what happens to him. But all of that changes at Whispering Pines Lodge, Corbett learns he is never really alone, thanks to his Uncle Dell, who takes care of him, and his new friend Pike, who pulls him into one mischievous adventure after another. It s a summer of change for ten-year-old Corbett even his name changes, when a cute girl calls him Griffy, a nickname he likes enough to keep. Griffy and Pike spend the summer searching for adventures and cool things to do. When Griffy catches two elusive walleyes, he is surprised to discover how much he likes fishing. Eager to test his newfound skills, he and Pike are stunned to hear that a seventy-pound muskie is on the loose. They resolve to catch the ferocious fish, no matter what. For Pike catching a world record muskie would be about the sport. For Griffy it would be about something more. Maybe, just maybe, if he caught that fish is parents would take notice. Think alligator. Think prehistoric beast. Think mean. Will they be able to catch the muskie and stop it from attacking anyone or anything?. Goodreads / Amazon / B&N

****
Underwater, less than seven feet from The Lucky 13, the muskie whipped its head back and forth trying once more to dislodge the lure implanted in its mouth. Go deep, its instincts said. But the muskie couldn’t. The water was too shallow. Find a weed bed. But in this part of the bay, the weeds weren’t plentiful enough for a five-foot, seventy-pound fish to tangle itself up in. Get to open water. But whatever had hold of it wasn’t letting that happen. Escape, its instincts cried out. Find a way to escape. Any way. So the muskie changed its tactics. The massive beast turned away from the depths of Lost Land Lake and swam with torpedolike speed toward the bottom of The Lucky 13.

G. M. Moore is a former newspaper writer, editor and columnist. The author grew up battling game fish on the lakes of northern Wisconsin. During the summer months, you can still find the Chicago-area author up north and out on the lake.

The Up North Adventure series is based on the author's experiences exploring the lakes of Hayward and Minong, Wisconsin. Filled with action and fun anecdotes, the series will keep even the most reluctant reader turning the page.