ARC Review: The Fifth House (The Only City Left #2) by Andy Goldman 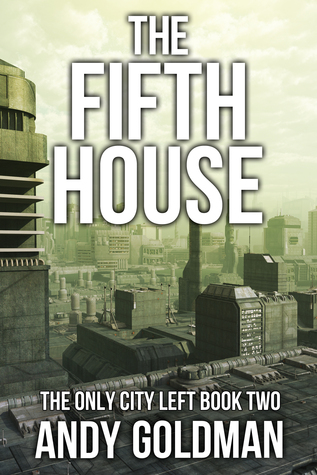 Allin Arcady searches for his lost love. Tyena Branch struggles to scavenge enough food to keep her mother and herself alive. And in the cat city of Pudlington, the uneasy truce between humans and felines is already faltering.

Into this turmoil enters the true power behind Doyle Arcady’s reign... The Fifth House.


(Book Two of The Only City Left series.)

I jammed my palm against my forehead, doing my best to soothe the anger building inside me. “You mobby piece of trash,” I said, only half-succeeding.

“The wolves killed for sport, burned down villages, tore families apart, and you’re upset because the party’s over?” I shoved him so that he tripped over one of his friends and fell onto his butt. “Get out of my sight. All of you. You’re not welcome in this sector anymore.”


Nice! More adventure time with Allin and Tumble. More action and even more were creatures. Plus, we get to learn more about the fifth house and what their deal is. Allin is doing all he can to find Tyena while she is doing everything she can to not be found. We also get the chance to visit another cat city.


Nothing worth pointing a finger at.


Allin loves Tyena but she hides from him thinking he hates her. She’s worried that they want to find her for being forced to serve his Uncle Doyle.


I really enjoyed this 2nd book in the series. Just as good as the first and it really built upon the first book. It felt like the same book in a good way. More creepy critters and monsters are introduced plus we get to see why the fifth house is so cocky. If you’ve read the first one or just need a new series to start, The Only City Left and The Fifth House are well worth it.

“I know he’s looking for you and that you don’t want to be found.
I know when he found me he was yelling your name while the Garden burned down around him.
I don’t know what’s so special about you that he hasn’t given up on finding you yet, but I’ll chalk that up to his general stubbornness,”
“The same old patterns,” Tumble said. “Even without their powers, they want it to be cat versus wolf.
And now some of them might be inside the city and we don’t even know it.”

I frowned. “So how do we get out of here without letting anyone know?”
Chuckling, Tumble replied, “Emperors like to keep secrets, Allin. My brother was no exception.
Officially, he had no mate, no children. Unofficially, he needed a trysting spot, one completely hidden from prying eyes. Not even an unused room in one of the scrapers would do.”
“You’re taking me to Banshee’s love nest?” I asked, mouth hanging open.

“The Fifth House isn’t a charity and we don’t accept just anyone who signs up. We need those who have proven themselves to us. That is why we bring war and destruction to Earth.  It’s all a test to see who is worthy."