WARNING: While I try not to spoiler alert anyone about the events in this book.  However, this being a last book in the series there may be a few spoilers for previous books. 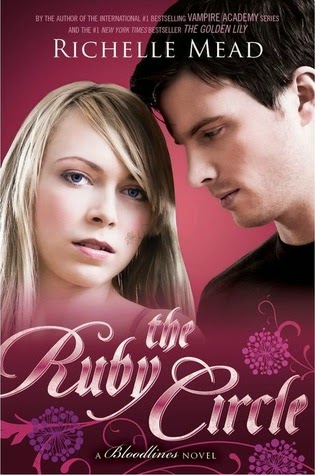 After their secret romance is exposed, Sydney and Adrian find themselves facing the wrath of both the Alchemists and the Moroi in this electrifying conclusion to Richelle Mead’s New York Times bestselling Bloodlines series. When the life of someone they both love is put on the line, Sydney risks everything to hunt down a deadly former nemesis. Meanwhile, Adrian becomes enmeshed in a puzzle that could hold the key to a shocking secret about spirit magic, a secret that could shake the entire Moroi world.

“Sydney,” Adrian interrupted, cupping my face in his hands. “Never, ever think like that. I don’t regret anything we’ve faced. Being with you is the best thing that’s ever happened to me, the one perfect decision I’ve made in a lifetime of fumbling and poor judgment. I’d go through it all again to be by your side. Never doubt that. Never doubt how I feel about you.”


Sydney and Adrian are trying to figure out life as a married couple.  Between the alchemist making threats of the alchemist toward Sydney if she ever leaves the protection of the Moroi court, and the taboo nature of their marriage among the Moroi, it hasn't been an easy road.    After receiving a mysterious package, Sydney has to decide whether she wants to risk her life by leaving court or play it safe. Adrian is torn with trying to help others with his spirit and potentially cause harm to himself.  With others lives on the line Adrian and Sydney have to determine if they want to risk their freedom, marriage and possibly lives to save others.

"Maybe it's not Canada," I conceded. "But it's exactly how I always imagined Canada would look. Except I thought there'd be more hockey."

All Good Things Must Come to an End


When Bloodlines was first announced I had mixed emotions.   I was excited to get to know Sydney, but also wasn't sure how such a straight-laced, by-the-book girl would carry a series.  Coming off of the original series where Rose was such a (pardon my French) bad ass, I was slightly skeptical.  I was pleasantly surprised, Sydney carried it very well and turned into a bad ass of her own right.

This was a very good conclusion to a wonderful series.   Something I loved the most is the fact Rose and Dimitri had a bigger role in this book.  This is fitting to me because it draws a bigger conclusion to the whole Vampire Academy world.  Since Bloodlines is a spin off, it is nice that it concluded with some of the characters that made me fall in love with the series.   This book had a lot of emotion and a lot of surprises and twists in it.   I love Sydney and Adrian's against-all-odds relationship and attitude.   They are the perfect mix together.  Despite all their struggles in figuring out the road they are going to take, they are fiercely loyal to those they love.  They don't hesitate to risk everything to go against everyone's order to go help Jill and a few other people in need.  This is why I love both main characters.   They are just good amazing people (even if one is a vampire LOL). The book and the storyline left me feeling satisfied and sad at the same time because I still want more.

"Maybe he only had one outfit, but it was mostly clean, and I was putting his diapers on correctly now"

I really did enjoy the book, but there were a few things that did bother me.   Like most books in the Bloodlines series, the first few chapters kind of catch you up on what's been going on since the last book.  Well, there was something that stood out to me that didn't really sit to well with me.   We knew that Jill disappeared from the last book.  However, they kind of just casually mentioned during the catch up phase of the book.   And they did have people kind of looking for her, there wasn't just an all out, all hands on deck search for her.  The WHOLE purpose of this series was to protect Jill.  The Moroi have money and all kinds of connections.   Yes once the story gets rolling they do go look for her, however, how that whole scenario was treated was uncharacteristic of the rest of the series.  It seemed odd to me.  That brings me to my second complaint.  She brings in a secondary story line that has a lot of promise.  (In efforts not to spoiler alert I can't give many details).  Something that could change the whole Moroi/dhampir world.   However, since this is the last book I will never know if anything will become of it.

"When it came to the strong willed women in my life, I found it easiest to nod and agree with whatever they dictated was best"

Conclusions on The Conclusion of Bloodlines


I loved this whole series and The Ruby Circle did not let me down.   It really was a great ending to a wonderful journey.  I do selfishly hope we get another spinoff series to explore some topics that were opened up in this book.   While in the beginning there was a little bit of hesitation because I am so used to the characters going so hard for everything and everyone, so I was not sure why there was not an all out everyone and every resource search,  it quickly turned back into the series I know and love.  I surely will miss all the characters in this series!   Maybe we will get to see them in some capacity again. (hint hint Richelle Mead)

“I told you before, we’re the center,” she said. “And the center will hold.”