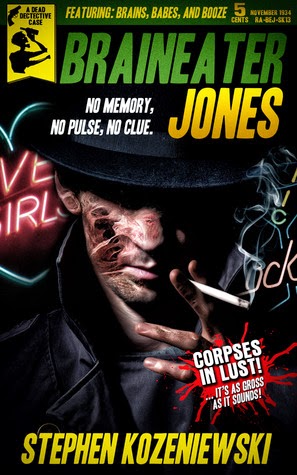 Braineater Jones wakes up face down in a swimming pool with no memory of his former life, how he died, or why he’s now a zombie. With a smart-aleck severed head as a partner, Jones descends into the undead ghetto to solve his own murder.

But Jones’s investigation is complicated by his crippling addiction to human flesh. Like all walking corpses, he discovers that only a stiff drink can soothe his cravings. Unfortunately, finding liquor during Prohibition is costly and dangerous. From his Mason jar, the cantankerous Old Man rules the only speakeasy in the city that caters to the postmortem crowd.

Cracking this case is a tall order. Braineater Jones won’t get out alive, but if he plays his cards right, he might manage to salvage the last scraps of his humanity.

"You ever have one of those days? One of those days where you wake up & you're already out of cigarettes, but it doesn't matter because it's raining & your umbrella has a hole in it? Then by the end of the day, sometime between when your boss handed you the pink slip & your old lady left you for your brother, nothing fazes you anymore because your so numb."


Braineater Jones wakes up dead.   And to make matters worse he has no idea who he is or why he is dead.   In his quest to find out answers about his own life, he meets a charismatic character who teaches him all about zombie life and how to survive.   Part of this survival is alcohol...and lots of it. During prohibition it is not easy staying in the liquor.  Especially if, well, you are a zombie.  Can Braineater piece all the clues together about his mysterious life and death before losing the last bit of humanity he has?  And who can you trust when everyone you know has a secret they are hiding?  Braineater Jones must rely on his quick wits and his one and only ally (who happens to be just a head) to crack this case wide open if he plans to reveal all the keys to his past and present.

"The two who hadn't seemed fit for the looney bin had called me braineater though.  It's a funny term for whatever I am, and I don't know if I like it......"


I must say I really adored Braineater Jones.   A general rule of mine before starting a new book, I try to know very little about it so I don't go in with a bunch of expectations.  That is usually when I am let down.  I received this request for a honest review.  I scanned the summary enough to know I would like to give the book a try but not enough to know much about the actual story.  That being said, I didn't know what to expect.   Well ladies and gents, we have a winner.   The book is told from Braineater Jones' point of view via a written journal.   From the first page, I was in love with Mr.  Jones.   He was very funny...I found myself laughing out loud a lot.  And since it's told from the main character's "journal", it is written how the main character talks.   I think this gives the story so much more character.  The way he describes things and even spells some things gives it a uniqueness.   The story itself is entertaining.   It is at it's core a who-done-it story.    The genre is listed as horror because most of the starring roles in this book are zombies, BUT in my opinion it would easily fit in a mystery/thriller and comedy genres as well.    While working his own case, he does take up office in what is known as the Welcome Mat as a PI. After working one of his cases, he befriends a zombie who only has his head left.  His partner in investigating the seedy underbelly of the undead world has no arms, no legs, no torso, he's just a head. Like one of those sculptures.  Its so absurd it's amazing!  There are several smaller investigations inside the bigger investigation.   All these different "mysteries" do end up intertwining beautifully.    Alcoholic detective zombies...what is not to love about that!!!

"The bartender stuck his finger in my hole.  Is that a violation? I wish he would have bought me dinner and flowers first.  Maybe it's pretty normal in our world.  What do I know?"

Dying Once Sucks But Not as Bad as Double Dog Dead

There is not a lot bad in this book.  So this section will be short and sweet.  It being placed in the 30s threw me some because of the slang (there is a handy dandy glossary in the back though).    There was a lot going on in this book and sometimes I would get lost in one of the plots and when the story jumped back to the other plot this short term memory girl had to do a lot of remembering who was who and who did what etc.  Some of that could have been on purpose since it was a journal.   I happen to write like I talk as well and if I get writing or talking too long I do tend to jump back and forth with my train of thought.

"Maybe I don't talk all the jive lingo, but hey, who makes up jive lingo anyway?  We do, that's who.  So maybe my words'll catch on, and then everybody else will look stupid instead of me."

ALCOHOLIC ZOMBIES AND BRAINEATERS...SOUNDS LIKE AN AMAZING PARTY TO ME


Overall, I would say don't let the genre of "horror" scare you off from this amazing little jewel.   Braineater is one of the funniest, most entertaining relatable people (errrr um zombies?) I have read about in a while.  This book doesn't take itself too seriously (captain obvious with a title and book cover like that) but it is wonderfully written.   The subplots intertwined with the main plot of finding out who killed Braineater blended masterfully.   It has a lot of absurdness, but that's kinda part of the greatness in this book.  The slang takes a little bit to get used to.  Sometimes I had to reread to try to make sure I had my head on straight.  But I would definitely recommend this book to anyone who wanted a good solid story with a little bit of goofiness mixed in.