Review: Business With Pleasure (Empathy in the Preternatural PNW #2) by Olivia R. Burton 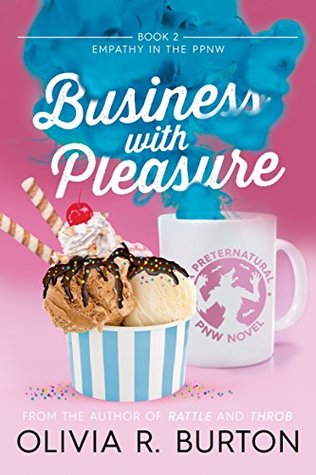 There's an assassin in town trying to catch a murderer, a lovesick werewolf trying to get lucky, and Gwen Arthur still has a mysterious magical marauder stealing her sugar stash. On top of all that, Gwen's estranged ex-husband Stanley’s in town asking for a favor. She’s got to help, of course, if only to ease her guilt over how they left things a decade earlier. Too bad she’s got no idea how to deal with a rogue admirer writing him weird letters, sending gifts to his home, and threatening to show up at a convention full of his beige-clad, sugar-eschewing fans.

Once again, Gwen’s got to step out of her comfort zone to confront strange situations, learn closely held secrets about her friends, and—worst of all—hit on her worst enemy. Gwen thought her life couldn’t get any stranger, but things are getting hot now that summer's hit Seattle.


Gwen knows she's not the normal heroine of a story, in fact she considers herself the quirky sidekick. The ones that we would think are the sidekicks are the more ninja-like companions and really very heroic. Chloe is one that we were given even more clues to a secret life yet no more concrete information of why she's such a great fighter and knows so much about supernaturals. There is something there, and I'm looking forward to figuring out exactly what it is (I have a guess for sure!). Then there's Owen who is new on the scene in this one. He's definitely helpful in rounding up the baddies and saving the day.

The plot of Business With Pleasure follows Stan, Gwen's ex-husband coming to town and the awkwardness that ensues due to that. He asks for Gwen's help with a stalkerish fan. It was quite fun watching Gwen while she visits a Con that is dedicated to Stan's characters in the books that he writes. On top of that, we have succubus drama along with poor Mel who has lost his werewolf mojo.

I love Burton's humor and find myself laughing throughout the story. The pace is spot on and there is plenty of action mixed with fun dialogue.


There's only minor niggles and nothing that takes away from the enjoyment of the story.


Mel lost all of his werewolf mojo in this one so his sauve, womanizing ways had flown the coop. Gwen actually enjoyed his company a little better this way, but there was just too much pity there at the same time. Gwen's ex-husband was here and we found out what split them up, but there was no romance to speak of. Then there was Owen. Just there for a good time, but Gwen made good use of that time.

Business With Pleasure was a solid follow up to Mixed Feelings. I love Burton's humor and the way that Gwen's powers are slowly building over time. Her ninja like friends are fantastic and oftentimes seem more like the hero/heroine than Gwen. The pacing is well done with action and dialogue plentiful. We were introduced to different supernaturals this go round and I can see this series having so much potential. Definitely recommended.