Review - Interview - and Giveaway: In a Blue Moon (Blue Moon #1) by R.A. Desilets 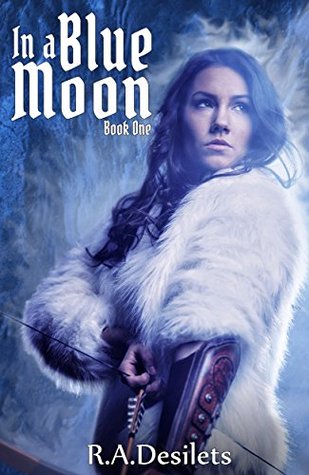 When Effy stumbles down the rabbit hole, she discovers the wondrous fairy tale land of East Valley in chaos. Death and insanity reign after the release of the deadly blue moon curse. Teaming up with the only sane people left—Jack the giant killer, Hansel, and Cat from Cheshire—they traverse East Valley, desperately searching for an answer.

They know Effy’s the key to unraveling the curse, but everyone who remembers how to break the curse is… well, cursed. The murderous mob has Effy in their crosshairs. With Snow, Red, Rapunzel, Gretel, and Pinocchio on the group’s trail, Effy isn’t sure any of them will make it out alive.


This was such a fun read! I've grown pretty fond of retellings. This one in particular reads like a dystopian set in fairy tale land. Effy finds herself immediately thrust into action and peril after she went down the hole and ended up in a chaotic, murderous world full of villains. Every one of those lovable, sugary sweet characters we've grown up with are out for blood. Thankfully, there are a select few that Effy calls allies.

Effy is a strong female character right from the start. She's accepted the situation she finds herself in, and now she's going to do what she has to do in order to get out of it. Not quite best friends out of the gate, but more reluctant partners, Jack stands beside her throughout the story. Jack is a fantastic character to have fighting with her. He's strong, stubborn, and confident. Mix that with Effy's courage and sass and you've got quite the combination.

I loved the additional characters as well. Hansel was very charming and the girls swooned for him, but I think Cat won me over. The magic and wonder surrounding her was unique and kept my interest. I would definitely want her on my side.


The only thing missing for me was even more information about the background of the world.


Effy and Jack are hilarious as a pair. They didn't get along at first, but gradually grew to an appreciation and then attraction along the way. They have a mixture of bull-headed banter and understanding each other without words.


A fantastic read! I love how Desilets takes you on a journey where you can't possible guess all the outcomes or paths. The humor sprinkled through the entire read never failed to keep me laughing. The danger and struggle was realistic and intense while at the same time the entire story is fantastical. The characters are the best part though. They either worm their way into your heart within the first few sentences or cause you to want to squish the annoying right out of their tiny bodies (I'm talking to you Pinnochio!). Definitely recommended.

Thank you so much for joining us to discuss In a Blue Moon!

Thank you for having me!

In this book, we follow Effy down the rabbit hole. What sets Effy apart from Alice who was the first down the hole?

The traditional Alice character has always been portrayed as extremely curious, while Effy is more determined to get out at any cost. Effy was fine with her life, not needing more adventure. Initially, she is an unwilling heroine, but quickly grows into the role she needs to survive. Her sarcasm and sassy attitude sets her apart too, because she uses her sense of humor as an emotional survival mechanism.

Out of all the men to choose from in fairy tale lore, why Jack the Giant Killer as Effy’s partner in crime?

I’ve always imagined Jack as this witty, somewhat egotistical guy. To face down giants, you need more courage and spirit than might be realistic. The idea of having Jack as cocky and arrogant came from his ability to escape any situation he’s put in. Since Effy is a strong-willed girl, who is unwilling to believe in the fantastic, they seemed like the perfect pair for witty banter and character development for the adventure across East Valley.

There was magic sprinkled throughout the story which I was a big fan of. How did you come up with the idea for the Blue Moon curse?

The story developed as a result of my nerdy loves: idioms, apocalypse stories, and fairy tale retellings. What would bring the apocalypse to the fairy tale world? With all the retellings out there, I wanted to set In a Blue Moon apart. I decided to turn the heroes we know and love into the villains. A curse would make anything possible. The idiom “once in a blue moon” came to mind, and I built a curse off the literal blue moon. Each book and novella in the series will have color idioms for their titles, which I am hugely excited about. Jack’s in-between novella is slated for publication later this year and is called Greener on the Other Side.

Anything you’d like to add that is special to writing this one?

I make playlists for my stories on Spotify, listening to the same songs as I write. Each song is curated to create a specific mood for the main character and tone of the book. Much like Effy, the playlist has a few fun songs, but is also full of attitude. If anyone is interested in the playlist, it’s available here: https://open.spotify.com/user/radesilets/playlist/4KIIX0Bha4EYD2lNhWgLOo

Let's get a little more personal:

What quirky writing habits can you tell us about?

When I’m outlining, I think about word count. I know this sounds weird, but it determines how many scenes I need to create for each story. I put the total goal at the top of my outline and write an outline with estimated word counts for each scene. If I need more words, I think of side plots, additional character development, and other tidbits I can add to bring more flavor to the main story. I never add scenes for the sake of adding words—any additional scenes need to mean something.

What do you think makes a good story?

Having an interesting main character you connect with and want to learn more about is essential. I’ve read books with incredible plots, but no real connection with the main character—those haven’t worked for me. I focus on characters first, plot second. My characters need to take me on their journey instead of me creating an adventure for them. Nothing beats a story with a strong voice. Now… you add an awesome plot and lyrical description to a book with great characters, and it becomes downright incredible.

What else are you working on?

There are two books I am working on beyond the Blue Moon titles. Conscious is the first in a YA Paranormal series. After a car accident, Madison wakes up in her best friend’s body. Since Emily had been the one driving when “Madison” died, everyone blames Emily for what happened. Madison assumes the role of her best friend, but she desperately wants someone to confide in. Conscious explores the effect social media has on our lives and the connections we make using text-based messaging, and also touches a bit on cyber bullying.

The End Diary is already available for free on Wattpad, but I’m going to edit it and publish it as an ebook later this year. It’s a YA Dark Contemporary novel. The End Diary is Megan P. Whitford’s manifesto, where she tells the truth about what happened between her and Carly. To Megan, the truth is all that matters. You can check it out here: https://www.wattpad.com/story/62134416-the-end-diary

As always, thank you for having me, Jaclyn!

Rachel A. Desilets was born in southern New Hampshire. She graduated from Emerson College with a B.A. in Writing, Literature, and Publishing. She lived in southern California for a bit and then decided it was too hot.

She currently resides in the rainy side of Oregon with her husband and cats.