Harry Potter Moment of the Week [96]

This is a meme hosted by Uncorked Thoughts and Lunar Rainbows.The idea is to share a favorite moment, magical item, character, spell, quote, object from the books, films or J.K.Rowling herself! Click the links to the blogs to see how to join up &  upcoming topics.

Would you rather have Potions with Snape or tea with Umbridge? 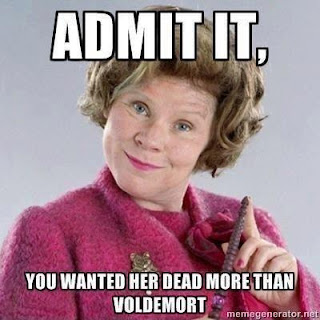 Potions class seems like a fun one to me, but then I'm a stickler for details so I feel like I'd do well there. And even if Snape makes snide remarks and occasionally makes Harry's potions disappear, he doesn't do it as often as you know he'd like to. RIP Alan Rickman.

Umbridge, however, would make me want to use unforgivable curses often. I would have as hard a time as Harry did keeping my temper around this woman.

Which would you choose?