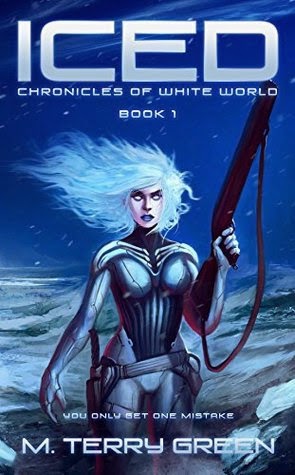 Though she doesn’t know her real name, Thirteen is sure of two things: survival and finding her sister. Nothing stands in her way—not the great Pacifica Ice Sheet nor the slavers she escaped—until her deadly hunt takes a maddening turn.

The first and only clue in her search is held by the survivor of a wrecked ice ship. But he’s not sharing. He has a daughter to rescue, and he needs Thirteen’s help.

In the unforgiving subzero, a wary alliance is formed. Although she’d do anything to find her sister and finally know her own name, Thirteen never forgets the first rule of the ice. You only get one mistake—your last.

Please Note: ICED is Book 1 in a dystopian and post-apocalyptic science fiction trilogy. Books 2 and 3 will be out in 2015.

She lightly touched the pendant through the fabric on her chest. Maybe this slaver ship would be the one. Maybe their captives would know something. Either way, the chase was on.


I love when a book has a new environment that I haven't experienced before. Iced has that as it feels like water world on ice but with openings in the ice that drop off into the abyss. Our hero, the Ghost (also known as Thirteen as slaver’s calls her), just wants to find her sister and she has no problem killing slavers to find out where she is. Then she ends up with her first lead, a man named Cord. His daughter has been snatched up and he'll only tell her where he saw her sister if she helps him get back his daughter. I love the Ghost as she is a bad ass who has to rein in her skills to lure in the slavers. The safety lines most people use to keep from being knocked off their skiffs just get in her way. Iced had a good pace with some interesting action.


They have a group that pops up known as skulls but you don't really learn anything about them in this first book. Well other than the fact that everyone fears them, they eat meat and can small blood from great distances.


No real romance in book 1 but it could be blooming for the Ghost and Cord. There is a bit of fooling around as the slaver kings wife has a thing with the prince. Only problem is the king knows by the way they act around him.


Overall, Iced was an interesting book. It has a fun new environment, potential fearsome race in the skulls and slaver royal family that has zero redeeming qualities. The heroine is more than capable of killing those that get in her way and now she has a reliable friend who has a past life of bad-assery (not a word but it should be) that he's tried to leave in the past. I’m looking forward to book two.

With a writhing, desperate squirm, instinct took over. She grabbed its head. Though hot breath coated her throat, she dug her thumbs into the depressions that should have been its eyes. Her fingers clamped onto its skull.

He started for the cockpit but stopped. She wouldn't be below when he was waiting for her on the ice. He glanced at the jacklines. Only his tether was clipped. But she didn't use the jacklines. He looked up the mast.
"No," he muttered. "Thirteen!"
She was swinging by the neck!

"Not too smart," she said.
Though Cord was angry, he couldn't disagree. "No doubt the Ghost would have done different," he said, seething.
"The Ghost survives," she said, setting the shotgun down but keeping her eyes on him. "It's what I'm good for."