Harry Potter Moment of the Week [16]

This is a meme hosted by Uncorked Thoughts.The aim of this meme is to share with fellow bloggers a character, spell, chapter, object or quote from the books/ films/ J. K. Rowling herself or anything Potter related! She is picking a topic within HP for us to focus on each week and then if anyone wants to take part feel free! All she asks is to link back to her blog :). There is now a full list of the topics to come here. 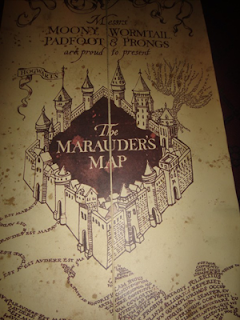 I love the Maurader's Map! It brings together so many characters in some interesting ways. When I was introduced to it, Fred and George own it and so graciously hand it over to Harry in his time of need. We later find out that Moony, Wormtail, Padfoot and Prongs created the map. This makes the map even more special to Harry since his Dad and Father-like figures Sirius and Lupin had a hand in its creation.

The Maurader's Map enables the person using it who says "I solemnly swear that I am up to no good" to view every corner, every room, every passage (even hidden ones) and the grounds of Hogwarts. The people there show up as footprints with a name hovering over. It doesn't differentiate between Jr. and Sr. however which does cause problems, and unplottable places like The Room of Requirement and The Chamber of Secrets never show up. To turn the map into a spare bit of parchment again, the user says, "Mischief Managed."

The map plays a fairly large role in the story as far as magical items go. It helped Harry sneak into Hogsmeade. It also very laughingly insults Snape when Harry is caught with it. Harry spotted a few people on the map that shouldn't be there which definitely changed the mode of the story. During Harry's sixth year, he hardly put the map down, constantly tracking Malfoy's movements to see what he was up to. Though it was only figured it out by determining that he kept 'disappearing'. The last book in the series found Harry desperately looking for Ginny's name so he could be close to her in some form.

I hope everyone that was celebrating Thanksgiving yesterday had a wonderful day!!
Posted by JezzebellJC at 11:42 AM