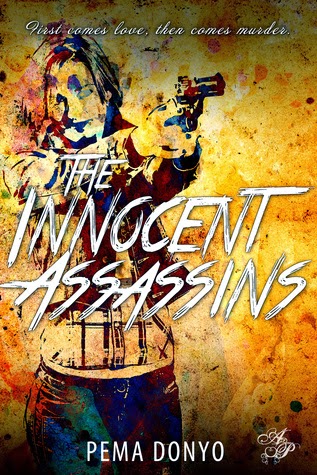 There are three rules to staying an assassin at the corporation of Covert Operatives: (1) your parents must be deceased, (2) your contracts must remain confidential, and (3) you must be under the age of eighteen.

After a murder mission goes awry a month before her eighteenth birthday, Covert Operatives assassin Jane Lu finds herself caught by the federal government and forced to spy for the CIA while remaining in Covert Operatives. Once her spying mission is over she will be allowed to live a civilian life without facing criminal consequences, a life she's only dreamed of having.

As Jane leaks information to the CIA, she uncovers secrets with enough power to both destroy Covert Operatives and her own boyfriend, Adrian King, who's next in line to be CEO of the company. When her identity as a double agent for the CIA is discovered within Covert Operatives, she must decide where her allegiance, and her heart, truly lies.

I liked everything about the book, right from the cover to the last page of the book. I'm more than happy that I got to read this one. What stands out in the book is the concept. CO or Covert Operatives is an organization that takes in orphans and trains them right from the age of 5 to become assassins. These assassins are given contracts to be completed, in other words, they are trained to kill people for CO's clientele. These assassins love CO and think of it and their co-assassins as their family. They worship CO and it's CEO and will do anything to protect them from the police and the CIA.

Jane Lu, the main protagonist, finds herself in a dicey situation and cuts a deal with the CIA when she realizes that CO is not a savior for orphans but a blood-hungry and money-making machine, that killed her parents. Now she is on the good side fighting against the CO, destroying it slowly from the inside.

Well, after this, I don't think anything else is required to piqué one's curiosity to read this book. Trust me, it's an excellent book with a strong concept and equally strong characterization. The ending of this book couldn't have been any better.

The on-off relationship of Jane and Adrian was a bit of a turn-off, so was the silly confusing talks between Jane and Emma. Most of the time it felt more like a high-school affair rather than an affair of two assassins. Emma constantly tried to convince Jane to leave Adrian for no particular reasons, which after two useless times started to irritate me!

The romance is the main theme of the book, as whatever Lu did was either 'for Adrian' or 'to Adrian' or 'against Adrian'! Though they had an unbreakable bond of love, they seemed to break-up at random, I mean Jane broke-up randomly all the f*****g time! They'll start arguing and all of a sudden she'll say, this isn't working and they'll break-up. I mean come on, give the guy a chance Miss Lu. So much for romance!

It's an excellent book with a strong concept and equally strong characterization. Jane Lu is the perfect protagonist (despite her high-school behavior at times.) Other than the high-school romance stuff, this book is pretty good. I'd recommend this book to all the YA readers.